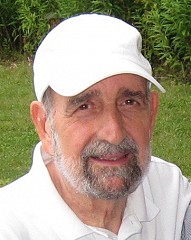 “I attribute my love for the masters to the eight years I spent during high school and college at the Boston Museum of Fine Arts. Living almost daily during those years with the work of some of the greatest painters that ever lived certainly had a profound impact on me. I eventually developed an approach to painting that can best be described in contemporary terms as Recontextualization.

Using a flat poster-like technique, I borrow images from the masters and combine them with images from popular culture such as storefronts, roller coasters, antique automobiles, etc. In each case, the foreground is painted first leaving out the original backgrounds, and then the objects or scenes are placed in the background. The choices of the combinations are primarily intuitive. There is no underlying message in the juxtapositions of images, and there is no attempt to criticize or satirize the works of art that are assimilated. When combined with contemporary images, my paintings are a bit startling, but remain as homages to the great artists that inspired them.

Progressing from purely instinctive design elements that "fit" together in a harmonious way, I am not unaware that the images I put together become elements of artistic metaphor and artistic meaning — for the viewer. I am delighted when viewers share their "narratives" with me.

When asked why I remain with this approach, I answer that I don’t think I have even scratched the surface of the possibilities this technique presents.”

Salvatore Gulino received his art education at the School of the Boston Museum of Fine Arts, Tufts University (BS), the University of Hartford, and Syracuse University (MFA). He has exhibited widely in Connecticut and Massachusetts, has had solo and group shows in New York City, and has been the recipient of several  awards, including eight from Connecticut's Silvermine Guild’s Art of the Northeast. His work has been reviewed by The New York Times, and was featured in Yankee Magazine, the French Magazine Artistes, Connecticut Magazine and Artis Magazine.